Get to Know Julia Kusko

From as early as Julia can remember, she loved to draw. As a kid, she mostly liked to draw people and animals, but she also discovered that drawing could be a way to solve problems. On her first day of kindergarten, much to her parent’s chagrin, she decided to draw a map of her route to school. Later in life, she discovered that architecture was the perfect fit for her love of drawing, creativity and problem-solving abilities. Now, as a Junior Architect at Hollis and Miller, she has a passion for designing engaging and imaginative learning environments and loves to think about how the quality of space can have an impact on learners.

Outside of the architecture profession, Julia loves to cook, especially French recipes inspired by her time studying abroad in Paris. In her free time, she takes yoga and barre classes and enjoys crafting, including macramé. She and her husband, Jon, have been married for almost three years and have two fur-babies, a cat named Mario, and a dog named Zelda. A fun fact about Julia is that she is a huge Harry Potter fan and has been since she first read the books in fourth grade. She and Jon even had Harry Potter nostalgia at their wedding, including a Harry Potter themed photo booth.

Get to Know Hillary L’ecuyerArticles, Company Culture, Get To Know 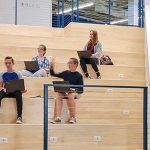