Founded on the belief that all students in the Kansas City, Missouri School District deserve the opportunity for college preparatory education, University Academy was founded in 2000 by Tom Bloch, Lynne Brown, and Barnett and Shirley Helzberg. The new school wanted to better serve the urban areas of Kansas City and help break the chain of poverty for so many school-aged children who were falling behind.

First operating in a facility leased by UMKC, the school quickly expanded, and construction on a new 172,000-square-foot facility began in 2004. School officials turned to Hollis + Miller Architects to help them plan and design a school facility not only emphasizing college prep but also career development, community service and leadership. When the new facility opened in August 2005, enrollment expanded from 300 students in grades 6-12 to roughly 1,000 students in kindergarten through grade 12.

In the years since, students at the school have continued to raise the bar for educational excellence, exceeding graduation rates of their urban core peers around the country and even outpacing many of their highly rated suburban counterparts. And in 2019, three University Academy students were admitted to Ivy League schools, and one former student became the first Ivy League graduate, completing a master’s degree from Columbia University.

Now two decades after its founding, we asked a few key leaders from University Academy what lessons have been learned in the last 20 years and where the school is headed in the years to come.

How does University Academy work to change the typical assumptions of urban core students?

Barnett Helzberg, co–founder: “Some said it couldn’t be done. People tell you that you’re out of your mind, you’re not going to be able to do this with these kids. But they’ve made the miracles happen … Our demographic – 75% are free or reduced lunch, single-parent families – these kids will tell you, it’s made a big difference.”

Stacy Graff, chief operating officer: “The Helzbergs believed that if you provide students with opportunities, they’ll rise to the occasion. We always maintain high expectations for our students, and want to make sure they understand this is an opportunity for them. The Helzbergs always felt like this is really a civil rights issue, and we’re always working to close that equity gap between urban core and suburban kids.

What are some ways you approach that in your programming?

Graff: “Today, all of our students have the opportunity to study abroad—at no cost to them … And of course community plays a huge role: Kids need to be successful outside these walls, so our job doesn’t end when they graduate. Our students leave here knowing they have a foundation that will support them through college and after.”

How does school design play a role in your education efforts?

Graff: “The amount of natural light in our building is so important—especially the library, which serves as the central hub of the school. I believe the aesthetic also really fits the functionality: Our hallways are large enough to display student work, our theater is host to the Kansas City Symphony each year, our athletic facilities work really well for our student-athletes. The overall layout really just allows us to manage the educational side, and it works well for both the teachers and students.”

How has Hollis + Miller contributed to the success of University Academy?

Helzberg: “Normally when you do something, you say, ‘I wish I’d done it another way.’ But it’s worked out really well.”

Graff: “Our relationship with Hollis + Miller goes back to 2005 when we completed our facility. They were the architect at that time, and they continue to be part of our community … I know Barnett always said the Hollis + Miller team knew how to ask the right questions and just how valuable that was as we embarked on this project.”

Kline: “What’s interesting about the design of the building is that they contemplated from the beginning K-12 all in one location, with lower, middle and upper schools broken up within the campus. That’s interesting and beneficial in a lot of ways … It feels like more of a community, and it’s really efficient for costs as well.”

What are some key lessons you’ve learned as you look to the future?

Graff: “We know it takes time to get students to accept their role in education and help them utilize the skills they learn here. But one of our strengths is our focus on family and community … We’re currently in the top 10% of schools nationally, and almost 75% of our students will graduate from college. We just feel very fortunate our school has been given this opportunity.”

Kline: “I tell any charter person who wants to start a school today: After everything I’ve learned in my career, if you’re going to do it, do it right from the beginning. The other stuff will probably come along afterwards.”

Helzberg: “Outcomes are all that matter.” 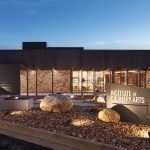 Beyond the Building: Colorado SKIES Academy’s impact on aviation and aerospace communities