Rescuing Princess Peach from the evil Bowser always felt pretty satisfying as a kid. Yet, video games have embarked on quite a new and adventurous quest since those quaint early days.

The games themselves are more sophisticated, sure, but the stakes are even higher, as this newest form of sports competition burns its way into screens across the country. More than 90% of teens are active video gamers, and that popularity has spawned an entire mega industry of gamers, spectators and high-stakes competition. In fact, an estimated 453.8 million viewers watched esports matches around the country last year, bringing in a record $1.1 billion in revenue from sponsorships and advertising.

But when you step back, you find some pretty impressive benefits for high schools—for both students as well as districts.

Educators know how important the sense of community can be for students. From athletics to drama to debate, these smaller groups within the school give students a social group to which they can gain a sense of belonging—a crucial component related to academic performance and overall happiness.

With its overwhelming popularity, adding esports as an additional extracurricular provides another option for students to find their “thing.” It gives them an additional way to learn teamwork and communication, as well as develop ways to handle success and failure. A very inclusive activity, esports is equally open to both girls and boys, and often attracts participants from a variety of backgrounds and demographics. Jim Brockman, esports director at Christian Brothers College High School outside St. Louis, elaborates in the St. Louis Post-Dispatch:

And while many of us may picture hardcore gaming as a socially isolating activity, high schools with growing esports programs are turning that model on its head, creating group experiences where students have a chance to connect with their peers and develop those crucial teamwork skills.

From high school to college – to pro?

Many high schools are also seeing the opportunity to leverage esports into additional pathways to college. The National Association of Collegiate Esports reports more than 170 colleges and universities around the country now have varsity programs, and they’re going after the best high school gamers with more than $16 million in scholarships each year.

And while a lucky few will end up going pro in esports, the activity is also introducing students to a variety of professional opportunities they can explore once in college, including esports marketing careers, business management, game development, team coaching and more.

Just as esports is catching on at the high school level, it’s already big time in colleges, with tournament organizer Tespa reporting its competitions involve more than 1,350 schools and 40,000 players—awarding more than $3 million in prize money.

Public and charter schools are no stranger to doing more with less to get the most use from the precious space they have. Many of these schools are finding ways to add esports to their existing facilities for a surprisingly small investment—often by using space they already have.

As we continue working with Raytown South High School in Raytown, Missouri, we are helping the district incorporate a new esports program into the new auditorium. By investing in some HD screens and additional data connectivity, the school will be transforming a space typically used only about 10 times per year for drama and plays into a multiuse auditorium used much more frequently. Plus, the new program has the potential to be a revenue generator for the school as spectators come to watch esports events in the future.

Auditoriums are often ideal spaces for esports because the special lighting and sound equipment are already in place, and the auditorium seating is ready and waiting for an audience.

Adding an esports program can also be a key differentiator for charter and independent schools as parents evaluate various programs and curricula and make a choice for their children.

Level up your school

As gaming continues to grow in popularity, more and more schools around the country are seeing the win-win scenario esports provides. Extracurricular activities in general are known to bring a wealth of benefits to students, including higher attendance, improved math and reading scores, increased focus and higher self-esteem. Esports is just another way to involve and engage more of your student population, to allow more high schoolers to take advantage of these crucial benefits.

After establishing the program, the next step is to leverage the power of the activity to open new doors for students, says James O’Hagen with Rockford, Illinois Public Schools:

“It is no longer ‘cutting edge’ to have an esports team at your school. What is cutting edge is what you propose to do with this opportunity through esports … The games should provide an experience to something beyond the games. To focus solely on gaming is missing why esports is so important in school culture.”

As the esports trend gains steam, we look forward to working with public and private schools around the country on best implementing a program to serve their students.

After all, rescuing the princess is great, but together we can do so much more.

Justin Durham is senior associate and client leader at Hollis + Miller Architects, an integrated architecture firm designing the future of learning environments, including higher education, public and private K-12. Share your thoughts on Facebook, LinkedIn or on Twitter @HollisandMiller. 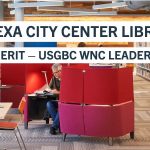 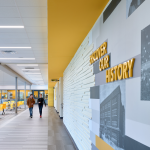