It’s one letter. Just one. (Although I think it’s symbolic it happens to be the letter “A.”) Transforming “STEM” to “STEAM” may have seemed like an inconsequential update to the well-known curriculum focus first introduced in 2001, but the results in our nation’s schools have been profound—and indeed deserving of a high grade.

The “A,” of course, stands for “Arts,” and the discipline fits in with its STEM counterparts well, explains Talia Milgrom-Elcott in Forbes:

“When the arts are part of STEM, STEM can come to life and spark connections for many more students to engage creatively, critically and confidently … Natural overlaps and places of connection between the arts and STEM are everywhere—and always have been.”

The importance of the arts is nothing new to educators, of course. But school districts are now beginning to prioritize those theaters, band spaces and choral studios – often some of the first line items on the chopping block in years past – to the benefit of students, families and the communities at large.

“This project is building excitement of being a part of something bigger than yourself.”

Aaron Money is the director of fine arts for Liberty Public Schools in Liberty, Missouri. The Hollis + Miller team is working closely with Money on the construction of a new performing arts center at Liberty High School. Previously limited to a small theater that seated only 200, the high school needed a more modern facility with room to accommodate the large student population and a growing community.

Liberty already had a robust and successful arts program, so passing a bond issue and upgrading to this modern facility was a much easier sell. Nevertheless, Aaron and his fellow administrators have demonstrated the power of the arts over the years, especially when they’re incorporated into the broader curriculum.

“Liberty really is a STEAM district,” Money said, “because we embed it in everything.”

The reason for that, Money said, is the overwhelming research that shows a clear correlation between the arts and student success, including these benefits from a report by the Missouri Alliance for Arts Education:

Adolescence can be hard on a student’s confidence and self-esteem, but it turns out the arts make an impact there as well. In a report from the Annals of the New York Academy of Sciences, a UK study found that participation in the arts several times a week nearly doubled the level of self-esteem in students when compared with those who rarely engaged.

The study authors offered a few explanations for this, as reported in Greater Good Magazine:

“Creating art can ‘validate the uniqueness of an individual, which gives rise to a sense of accomplishment and to feelings of self-worth,” they write. Also, ‘the arts have been shown to support a sense of social identity’ and can ‘encourage goal-directed behavior, and enhance social resilience.’”

The best part of the study? You don’t have to be first chair or at the top of your drawing class to see the benefit: “Engagement, not ability, seems to be the key,” the study reports.

Money explained that he’s witnessed how experiences with the arts can contribute to a larger sense of community, which directly boosts confidence and engagement. Beyond just the actors and musicians that stage a musical, for example, students interested in production, lighting, audio engineering and even carpentry play crucial roles in the production. This STEAM approach extends the theater family and creates a larger social circle of students with different interests—all working toward that common goal and sharing experiences along the way. (It also proves the fiscal value of these types of projects because they become multi-use spaces that impact many more students than ever before.)

STEAMing toward the future

The good that can be drawn from the arts extends well beyond the classroom years, of course. The real goal is to use these programs to better prepare our young people for the world beyond. Problem-solving, communication skills, an innate curiosity—all necessary competences our students will need as they grow into adults, explains Dr. Jenny Nash, Head of the Education Solutions Design Team at LEGO Education, to Forbes:

“When we think about STEAM learning, we’re really thinking about the wide range of skills students need in a changing world. With STEAM, students naturally see the endless possibilities and intersection points as they choose – even create – their own career paths.”

From the new performing arts center in Liberty to a new, state-of-the-art band practice space at Blue Springs High School, we feel privileged to be a part of so many meaningful projects that will play such an important role in shaping the lives of area students.

It looks like that one “A” was all it took!

Jennifer Berka, AIA, is a client leader at Hollis + Miller Architects, an integrated architecture firm that designs the future of learning environments, including public K-12, private and higher education. Share your thoughts on Facebook, LinkedIn or on Twitter @HollisandMiller. 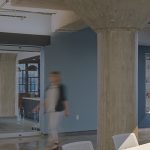 Behind the Colorado school bonds: Integrating furniture into learning

Behind the Bonds: Improvements leaving a lasting impact