With more than 14,000 students, the Blue Springs School District is one of the largest districts in the Kansas City area. Yet, for more than two decades, all ninth-graders at Blue Springs South High School attended a separate Freshman Center.

After a bond issue was approved by area voters in August 2018, the district began working on a new Freshman Center, which would become a part of the existing high school. The center was part of the district’s long-range plan as a way to strengthen the sense of school community.

And because entering high school is a huge transition, the goal of the new center was to alleviate stress points and make that transition as easy as possible for the students, while creating a strong sense of community and Jaguar pride.

The district chose Hollis + Miller Architects for the project, and Assistant Superintendent Jason Woolf said the firm’s track record on previous projects was the driving factor.

“We’ve had great success with them over the years,” he said. “We didn’t want to use anybody else because we know the job and the quality of work they do.”

To begin the process, the firm drove a couple of vans filled with architects and school representatives to Oklahoma to learn some best practices from a recently built freshman academy. Using the lessons they learned there, the team began the design process, placing a lot of focus on how Blue Springs students would use the new space, and how the design could reinforce the school’s overall goals. The firm worked closely with educators, staff and even students, said Dan Anderson, director of buildings and grounds for the district.

“When kids get out of class, where do they huddle up? Making that environment rich – making it purpose-driven – they spent a lot of time focused on, ‘What are your values in the schools?’ Then, they centered their designs and ideas on those kinds of mission statements or mottos.”

To accomplish that, the team created a large commons area to serve as a cohesive connection point between the existing building and the new center. The space was punctuated by a large wall of wooden slats (solving an acoustic issue in a nonobvious way), learning stairs and a vibrant jaguar, the school mascot. This space would offer many options for socializing or studying, and could be used by both the freshman wing as well as the upperclassmen.

Lively graphics were also added in school colors to reinforce the Blue Springs South brand, from the school interior to the street view, where a 56-foot, lighted stainless steel jaguar instills a sense of school pride in students and visitors. All students, staff and parents now enter through the same doors, creating a sense of community for the overall student body.

The new freshman center was fast-tracked and completed in August 2019 in time for the new school year, and incoming freshman were finally united under one roof alongside their peers. Woolf said the early collaboration led by Hollis + Miller was key to the project’s success:

“They do a really good job of reaching out to all the stakeholders at the district,” he said. “They don’t act like they know more than a teacher does; they sit down, they listen to you and they want your opinion. And if it’s not what you want, they’re not forcing it. They want to collaborate with everybody to make it a great product at the end.” 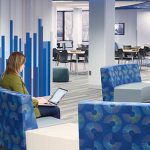 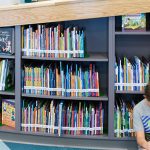 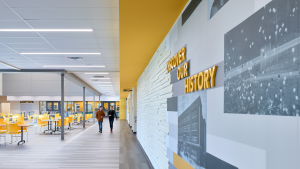